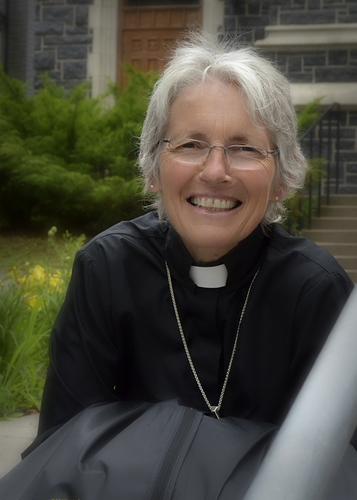 Christine provides spiritual direction (also known as spiritual guidance or spiritual companionship) to members of the Cathedral, the Diocese and beyond.

She has a long association with the Cathedral beginning as choir mother, when her four sons and their father were in the Men and Boys’ Choir, as well as being Coordinator of the Pastoral Care volunteers for several years. She returned to the Cathedral as Pastoral Associate from 2015 to 2018, and now serves as Spiritual Director in Residence.

Christine has worked as a nurse, social worker and psychotherapist in private practice. While she was preparing for ordination as a Diocesan Deacon in the Diocese of Ottawa she took a two year course in Spiritual Deepening and Spiritual Direction, from Atlantic Jubilee Program at Tatamagouche Centre in Nova Scotia. Her passion is the relationship of religion and spirituality to healthy human development and to creativity. Her spiritual practices include: Centering Prayer, pilgrimage and walking, spiritual listening and silent retreats

For relaxation and inspiration she likes being active outdoors, particularly in hiking, cross country skiing and swimming. She also likes being involved with food: gardening and cooking. Christine has lived in Nova Scotia, Ontario, Quebec and also in Germany.

Click here for more information about Deacon Christine Jannasch and her practice.