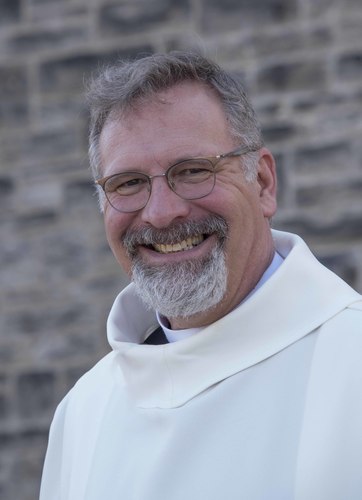 Canon Doug Richards grew up in many small communities in Southern Ontario.  Being the son of a Bank Manager, moving location seemed to be a part of life.  In his early teenage years, a friend of his father asked him if he would follow in his dad’s footsteps and become a bank manager.  He responded, “No, I want to live in the same home all of my adult life!”  This has not been a reality for Doug.  His experience has been that when you say ‘absolutely not’ Divine ears prick up and God’s wonderful sense of humor comes into play.  Since being ordained in 1992, Doug has served in seven different parishes before coming to the Cathedral, experiencing 8 different moves in 27 years.

After working as a waiter/bartender for a couple of years between High School and University, Doug began his education at Lakehead University in Thunder Bay, Ontario.  After experiencing University cut backs in the department of Philosophy, he transferred to Carleton University to complete his Bachelor of Arts.  Having completed his BA he enrolled at St. Paul University where he gained his Bachelor of Theology in the spring of 1992.

Doug was ordained deacon and priest in the Diocese of Ottawa in 1992.  Prior to his appointment to Christ Church Cathedral in 2019, he has served in several different parishes.  His ministry experience has been rich and fulfilling.  He has served in both the Ottawa and Ontario Dioceses, as well as having a part of his last parish being in the Diocese of Montreal.  Currently, along with his duties as Vicar at the Cathedral, he is the Clerical Secretary of Synod.

Doug is married to Richard, who is completing his PhD at Carleton University.  They share their home with two cats, Maggie and Cassie, who regularly let them know that they are in rulers of the house.