Dean of Ottawa and Rector of Christ Church Cathedral 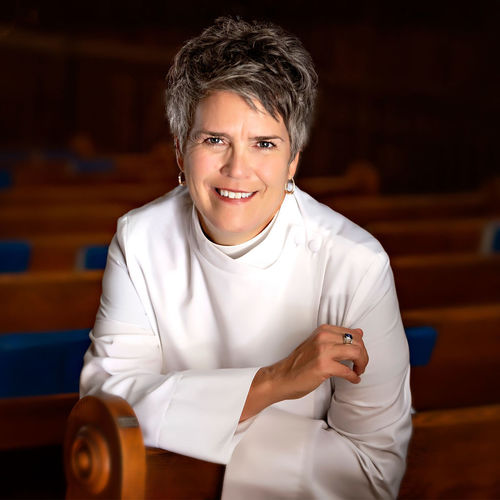 The Very Reverend Elizabeth Joan Bretzlaff’s career is one of firsts. She is the first woman to serve as Dean of Ottawa and Rector of Christ Church Cathedral. In the early 1990s, she became the first female priest on staff at the Cathedral Church of St Michael and All Angels in Kelowna, British Columbia. She is the first (and only) daughter in a family of sons, and was the first from that family to move halfway around the world—twice.

Dean Beth grew up on a dairy farm in Shawville, Quebec. Being very involved in her local parish, she felt drawn to pastoral leadership from an early age. At just seventeen—encouraged by her bishop, Edwin Lackey, who became a great influence throughout her life—she found herself under evaluation by a panel of senior clergy, not all of whom looked favourably on the prospect of ordaining women.

After this nerve-wracking experience, Dean Beth fled the idea of a career in the church, but the idea did not flee her. Two years after completing a B.A. in Psychology at the University of Ottawa, she found herself back at school, this time for a Master of Divinity degree from the Vancouver School of Theology. She was ordained deacon in 1993 and priest in 1994 in the Diocese of Kootenay. Her time as Curate and then Vicar at the Cathedral Church of St. Michael and all Angels formed her priesthood, instilled in her a love of liturgy and community building, and taught her about the unique role of a cathedral’s ministry.

Dean Beth’s love of challenge and change then led her down a different path, and in 2001 she became Publicist and Acquisitions Assistant at Wood Lake Books/Northstone Publishing, indulging her love of literature. In 2004, a transformative opportunity took Dean Beth to New Zealand, where she lived into her passion for working with young people in her role as Child, Youth and Family Educator for the Diocese of Dunedin. That passion, and her desire to serve the wider community, led her to complete a postgraduate degree in Social and Community Work at the University of Otago, which she put into practice as a Youth Justice Social Worker with a focus on the promise of restorative justice.

Despite these many vocational adventures and all of the firsts that came with them, when Dean Beth thinks of the event that most profoundly shaped her life and her career, it’s not a first that comes to mind—it’s a last. It’s the moment when she held her infant daughter’s hand in a New Zealand hospital and said her last goodbye. Hannah Griffin, who arrived in this world in November 2006, was born with a heart defect that took her life just two weeks later. But motherhood doesn’t end when a child’s time on earth is over. Dean Beth’s role as Hannah’s mother and as a pastoral leader are forever intertwined, providing a wellspring of hope and love that guides her theology, her practice of ministry, and her quest to live a life of self-discovery and connection with others.

That quest brought Dean Beth back to Canada in 2010, where she accepted a position as Chaplain at Ashbury College in Ottawa. That role drew on both her pastoral experience and her love of engaging with youth, and it deepened her commitment to working with interfaith and secular communities. In 2013, she was called to ministry at St. John the Evangelist Ottawa, where she served as Incumbent and worked to make the Anglican tradition alive and relevant in an urban context. In September 2020, she was installed as Dean of Ottawa and Rector of Christ Church Cathedral.

Dean Beth is known for her memorable laugh and her contagious and irrepressible sense of humour. When she is not serving as Dean and Rector, she is most often found pursuing adventures outdoors, usually with her bike, her skis, or her beloved red kayak propelling her through the wilderness, camera in hand. Her philosophy for living—the philosophy that has helped her to conquer all of those firsts, and to endure the painful lasts—is best encapsulated by the poet Mary Oliver: “Pay attention; be astonished; tell about it.”